Vai al contenuto
Home page / Read in english / “You wanted to find Fiorito? Well, here it is”- an interview with Mike Fiorito

Mike Fiorito is a writer, an Associate Editor for Mad Swirl Magazine and a regular contributor to the Red Hook Star Revue. His books are Call Me Guido (Ovunque Siamo Press), Freud’s Haberdashery Habits and Hallucinating Huxley (Alien Buddha Press).

What is your connection to Italy and to your origins?

My father’s family comes from Sala Consilina, which is about an hour south and east of Naples.  My mother’s family comes from Sicily; we don’t know the town they are from. On both sides, my grandparents were born in the United States. As such, our connection with Italy was virtually non-existent when I was growing up.  Like many Italian Americans, our connections were distant and second hand.  For instance, I heard my Sicilian grandparents speaking Sicilian, but I had to try and pull phrases and words from them.  Some of which I had written down.  But the language was not actively taught to my mother, her brother or any of the grandchildren.  My father imagined his link to Italy via Neapolitan songs.  Growing up, my father talked about Jimmy Roselli and played his music, for instance.  He tried to sing them in Neapolitan dialect.  I can still hear his voice that way.  And, in general, there was a lot of music played, most of it Italian music, like Louis Prima, Sinatra, Lou Monte.  My father, more than my mother, loved all things Italian.  At the time, I found that annoying, but I’ve come to appreciate his perspective. In many respects, Call Me Guido is about my rediscovery of my father’s love of Italian music and history.

Have you yourself ever made the trip to the Old Country, to check out your family roots?

I’ve been to Italy two times.  The first time I went to Florence and the surrounding cities and towns.  Then, I went with my wife (on our honeymoon!) to Naples. From there we made an expedition to Sala Consolina. My father had been dead for about 25 years when I went.  Funny, but it felt like a pilgrimage to my father. The irony is that my father had never been to Italy, but he talked about Sala Consilina. Like so many Southern Italians, we are left to imagine our history, as there are so many breaks in our connection to it.  After searching for the Fiorito name when I was in Naples, then in Sala Consilina, I finally found a trace of our family history.  We stayed in a part of Naples that was close to the airport.  The area looked like Times Square.  It was littered and a little rough.  Just outside a piazza (where birds had pooped all over the ground), I saw a big sign that hung up on the front of a watch store which had Fiorito written on it in gigantic letters.  It was very funny.  Like the universe was winking at me saying “you wanted to find Fiorito? Well, here it is.”

Do you speak Italian? Do you understand it? Do you know it? Why or why not?

My spoken Italian isn’t very good.  I can manage, especially if I have a dictionary.  My reading comprehension is much better. As mentioned, my maternal grandparents spoke Sicilian.  I didn’t understand at the time that Sicilian is a different language. I studied Italian in high-school and in college and achieved a decent level of written and spoken competency.  Even back then, I didn’t understand why the language my grandparents spoke was different from the Italian I learned in school. Also, in NYC in the 70s and 80s, most of the Italians were from Southern Italy. Many of the people who I knew, or whom I met, spoke a dialect.  I hardly had a chance to practice speaking and developing my competency.  It was very frustrating and, as mentioned, was perplexing.  That said, if I had made a point of it, I supposed I could have sought out Italian language speaking groups. But in my twenties, I was interested in other things, so I didn’t devote the time.

What was the inspiration for writing “Call me Guido”?

The inspiration to write Call Me Guido was a composite of a few things. One of the inspirations was to address the shaming and stereotyping I had experienced (and others before me) as an Italian American.  I am still amazed at how some (who consider themselves) “liberal” minded people feel at liberty to say offensive things to me about my Sicilian or Neapolitan heritage before they even know how I might react.  I’m interested in this phenomenon as a cultural study.  Why do we get singled out?  In America, the term Guido is derogatory (though I’ve been told by non-Italians that it isn’t).  My intention in Call Me Guido is to reclaim the greatness of the Guido name.  The story takes us back into the history of Neapolitan music and threads its way through the Crooners like Sinatra, Roselli, and Bennett, and then to the great Italian luthiers in NYC.  I also attempt to restore Guido as an honored name.  For example, Guido Cavalcanti (poet, friend of Dante) and Guido D’Arezzo (inventor of modern music staff notation).

When you write what is the role of the “settings” related to Italy?

Call Me Guido has parts that take place in Italy. I describe my visit to Naples and Sala Consilina.  In addition, I often write about Italian subjects and Italian matters.  I have a column in the online magazine Ovunque Siamo called Guido’s Corner. This column mostly focuses on Italian subjects, from history, to Italian music, Italian food and more.  I have a collection of essays from this column and other journals that is soon to publish.

What does it mean for you to have Italian origins?

I often write about how remnants of Southern Italian culture have stayed in our family – even generations afterwards.  For instance, we are fiercely loyal to each other.  We are passionate.  We argue.  We talk with our hands.  We love intensely.  We use Italian slang words, sometimes to insult each other.  We are inherently musical.  And we know how to dance.

Do you think there is still a stereotype about Italian Americans?

Sadly, stereotypes about Italian Americans persist.  All you have to do is to turn on the TV or go see a film.  I’m ok with stereotypes.  I explore mafia tropes in my writing.  They are a vital piece of our history, especially in this country. But as an Italian American, I need more of a canvass to express my identity.  Some Italian American stereotypes are rooted in our incredibly unique diaspora.  How we were starved out of Southern Italy, essentially left to die after the unification.  That many of us came to this country uneducated and illiterate (more than in other countries in Europe).  What I find interesting is how Italian Americans are singled out.  Why is our back story not told?  Why is it okay to say something offensive to Italian Americans in a public setting? We’re supposed to laugh.  It’s a very unusual phenomenon. I often cite the example of when my wife and I met a friend who worked for MTV as a censor.  I had never watched any of the reality shows on MTV.  I was curious about what kind of racial language was permitted on the show. She said that the only racial slur that was allowed was the use of the term Guido. I said, “are you okay with that?”  She didn’t seem to think there was anything wrong with it.  In another instance, I was talking to friends who are even more left than I am politically.  When I mentioned the title of Call Me Guido, one of them said “I’m sure a few sensitive Italian Americans will be upset by that title.”  I replied, “I was hoping everyone would be upset by it.”  Frankly, I think it’s vital that we all try to learn more about each other’s cultures and histories.  Being solely focused on your own heritage is a dead end; rather, in my opinion, your own family story and culture should serve as a portal to other people’s stories and histories.  When we all meet each other where we are, perhaps we can then move forward. 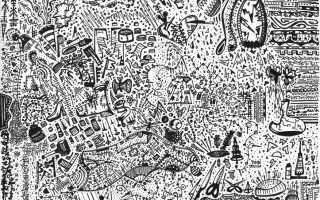 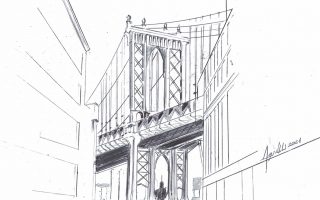 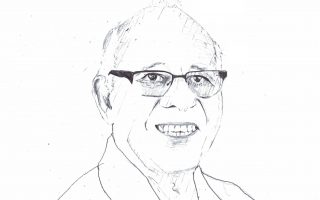 George Mazzei and the “conquest” of italian language