His name is George Mazzei, with 84 years of life behind him to cherish and look back on. But, for him, there is still so much to see — as I spoke with George, I could hear his passion for life through the way he spoke.  Born and raised in Brooklyn, New York, he now lives in Palm Beach Gardens, Florida. But his heart resides and always will reside in Italy.  The conquest of the Italian language is, according to him, a “continuous procedure.” But, every mission has a starting point, and Mazzei’s took place in the early 2000s.

Mazzei’s grandparents were born in Italy, with his father, aunts, and uncles all having been born in Brooklyn, just like Mazzei himself. On his father’s 80th birthday, George decided to bring his father to Italy on vacation as a way for them to bond over their Italian heritage. At first, his father was skeptical, because he had no family remaining in Italy anymore so he didn’t see the point in going. However, George insisted, and thus, the journey began.

One night, at a restaurant during the vacation, George tried to speak in broken Italian to the Calabrian waiter. George’s father questioned George: “What are you trying to do?” and George coolly responded: “Speak Italian.”  Being that George’s father’s first language was actually Italian, he began to speak to the waiter in Italian, and George was very proud of his father at that moment. Therefore, George came to decide that he wanted to learn the Italian language once he retired.

In 2001, Mazzei decided to go to Italy with his wife. He was stuck in Rome, so he called his Irish priest friend from New Jersey and went to dinner with him. His priest friend was well-known in Italy and spoke fluent Italian. The friend had gone to the region of Marche and learned Italian through the church, even being stationed in Vatican City. Therefore, George became inspired by him.

Shortly after retiring, Mazzei enrolled in a 6-week full-immersion Italian course in Italy and stayed in an agriturismo with friends. He went to immersion school from about 09-16 every day as his wife toured around, ate, and partied. After the experience, Mazzei was elated and from that point on, his life would never be the same. He came home that summer, and felt the urge to continue learning Italian. Therefore, he enrolled at Florida Atlantic University and took his first domestic Italian course with Emanuele Pettener. Soon enough, he became close friends with the Petteners, and took courses from Ilaria and Emanuele while not in Italy. He could not get enough of the courses, and passionately told me that to him, it was not about the number of credits he earned, but rather his love for the Italian language itself. Whenever he meets with Ilaria and Emanuele down in Florida, he says that he speaks only in Italian with them, in order to immerse himself in the language domestically.  When he goes to Italy, Mazzei tends to stay in the area of Urbania, in the region of Marche, with his friends. In fact, he is often nicknamed the “Mayor of Urbania” by them, as he had visited every year up until the pandemic hit.

Mazzei’s grandfather was born in 1872, in Italy. At the time, the people of Italy were often without food, and so he would search for a better life in the United States. At the age of 22, he immigrated to the USA. Having worked as a women’s tailor in Italy, when he arrived in the USA he worked also as a women’s tailor in an American department store. He then went back to Italy and married. Finally, he came back to the USA on a boat and had nine children with his new wife. Two of the children tragically passed away during infancy.

George’s grandfather had enough money in the USA because he was a tailor. However, George’s grandfather passed away when his father was a teenager. Life for George’s parents was tough because at the time in the United States, there was a lot of discrimination against Italians. Not to mention, after the passing of George’s grandfather, George’s father had to quit school around the age of 16 in order to find a job and take care of his family. They lost their house because they couldn’t pay the mortgage, and the girls got married off. George’s father then stayed with other relatives. He opened up his own battery business at age 18, and got married at age 24. His wife, George’s mother, was Scottish. They raised their family, George being a part of it. During WWII, George’s father worked in the Navy Yard as an electrician. After the war, he re-opened his battery business to then include radios and electrical appliances in general.

George recalls that his childhood in Brooklyn was surrounded by many different nationalities. His best friend was Irish, but he also had a great friend, Paul, whose parents were from Rome. On Sundays, he would go to Paul’s house for dinner, having been offered a huge feast of food, wine, and soda. George fondly compares this experience to a Thanksgiving dinner, the catch being that it happened every week!

Mazzei says that every time he visits Italy, he feels “like it’s Christmas morning, [he’s] five years old, and about to open [his] gifts.” He becomes very happy to see his friends and party with them. It feels “like a homecoming.” He often enjoys feasting with friends, among them being the Petteners, in Italy. George’s wife doesn’t speak Italian, and doesn’t have the voglia or the desiderio to learn, but she understands a lot of it. For example, George tells me, laughing, that at times she points out things in Italian that he can’t understand himself.

In 2020, Mazzei was a guest at the Italian-American Film Festival, hosted by his alma mater, Florida Atlantic University. One movie in particular stood out to him, which told the story of an African-American man from The Bronx who learned Italian in the streets and, despite having faced much discrimination due to his race and the dialect of Italian he spoke, wound up getting a teaching degree and teaching Italian! George compares this film to his life story in the sense that he also learned a mixed dialect of Italian in Brooklyn in New York growing up.

Mazzei says that at the festival, he was interviewed and asked about his experiences as an Italian-American who was so immersed in the Italian culture.  After being asked what his favourite word or phrase in Italian was, Mazzei answered, without hesitation, “Gim’!” which is a word in the dialect spoken in Urbania that translates to “Andiamo!” (Let’s go!) in standard Italian. Or, more specifically, he likes the phrase “Gim’ all’enoteca!” (He compares the joy of an enoteca to a “carnival.”)

Mazzei has four children and 11 grandchildren. None speak Italian, because they either live in New York so George can’t teach them, or they are too busy with school. However, Mazzei brought two of his grandsons to Italy two years ago.  When asked what being Italian-American means to him personally, he used specifically the word radici, which translates to “roots” in English. Because, after all, identity is not only inherent, but just like radici, when tended to and watered, it will turn into a beautiful fiore. 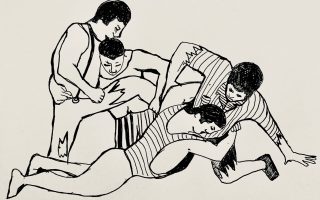 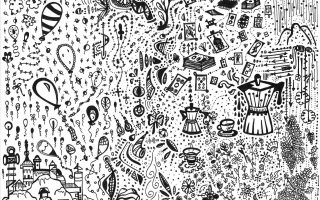